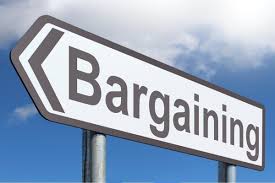 You are here: Home / Member Thoughts / Holding to Account

I’ve been with NTFC since before our current name, since before we had officers, since before we were a certified bargaining unit (in 2014). I was lucky enough to serve as our first President, and to do my small part to help shepherd through our first collective bargaining agreement, which we bargained from 2014-16 and which we had to go on strike to settle.

Along the way, I’ve come to understand that being a union member is not as obvious a decision for everyone. There’s skepticism about what a union can actually achieve, about the perceived problems it can cause, and about how it might change the relationship between worker and the employer. For me, those are all positives, and union membership has always seemed a natural choice. But if it doesn’t for you, let me ask: If we don’t provide the incentive for changes that protect us, from what incentives will the employer work?

I don’t presume that administrators at the University of Illinois are malicious or even anti-union, but I can say from experience that they need to be reminded, and often, to act on the rhetoric they use about what they value and who they reward.

However, I’m writing today as an optimist. In our last contract campaign, there were clear disconnects between the University’s Bargaining Team and the Administration, who are the ones that actually approve any real changes in a contract. I take it as a positive sign that the University’s team now includes a representative from the Provost’s office and that our Chancellor was able to summarize the state of bargaining in-depth and correctly at the Academic Senate meeting on April 1. These are great signs, but we will need to reinforce them as we go, holding the administration to account.

We’ve done a lot in the last five years, including setting base-line salaries for the full-time non-tenure-track faculty we represent, establishing better long-term contract protection for those that work here more than five years, and more generally improving the recognition and standing of NTTs on campus.

I am proud of what we’ve achieved in the past and look forward to where this bargaining cycle will lead us.