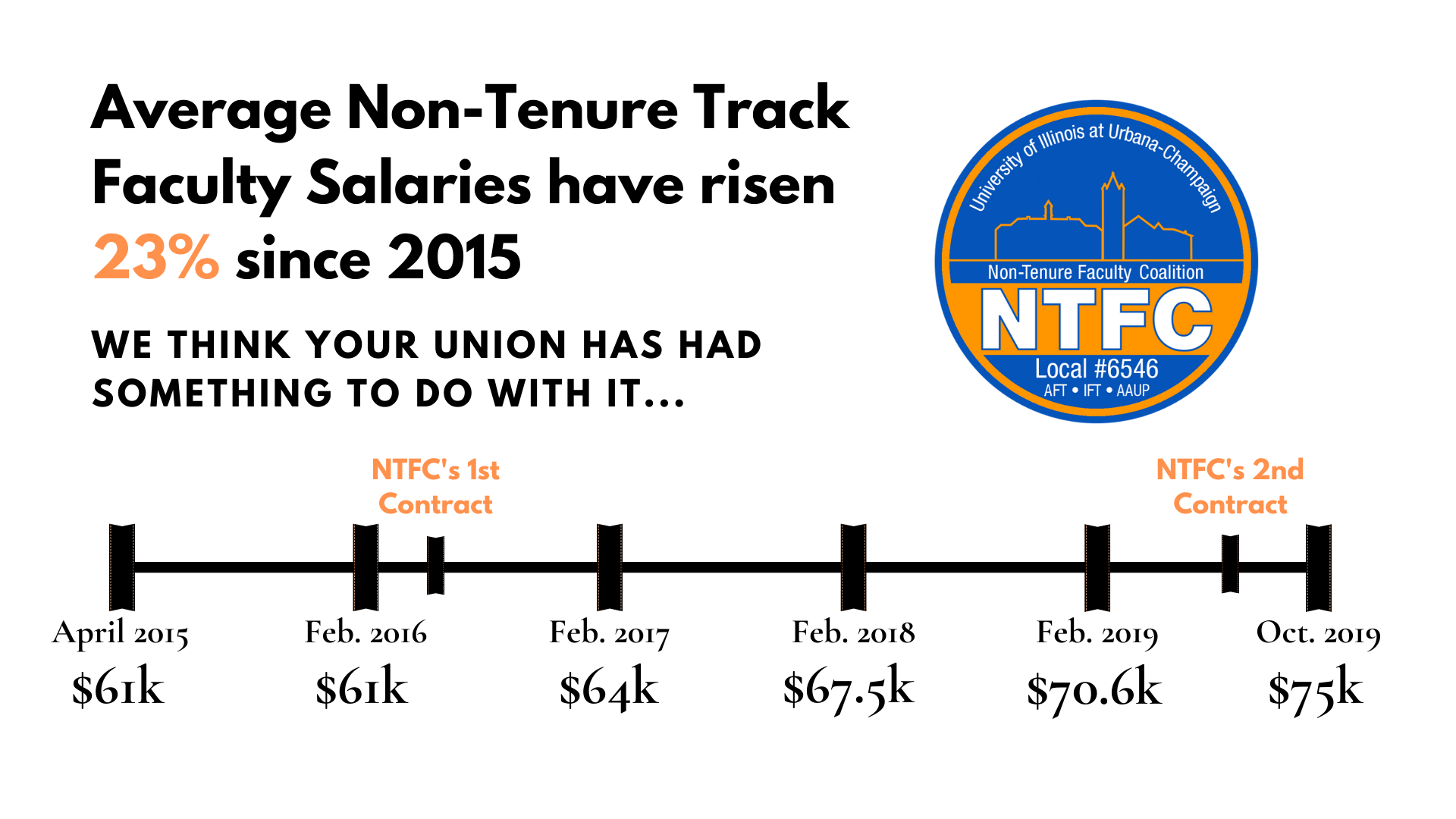 You are here: Home / Know-Your-Contract / All About Wages, Part 1 of 3

Since NTFC won our first contract in the spring of 2016, there has been a dramatic increase in the rate at which average salaries have risen, as shown in the timeline above.

While most of us are happy to see our paychecks increase no matter the reason, it’s also important to understand why and how these increases occur. In this first post of three, we take a look at Minimums in Article VIII of our contract–the part that’s all about wages.

Before NTFC won our first contract in 2016, there was no set minimum salary for full-time, non-tenure track faculty (NTT’s). Some non-tenure track faculty made as little as $30,000 a year, a salary on which it was nearly impossible to support a family, manage student debt, or take-on mortgages and car payments, much less support their professional development needs like traveling to conferences or buying new books for research. Furthermore, most NTT’s knew that at other universities nearby, like the University of Illinois at Chicago, unionized NTT’s were guaranteed minimum salaries that were already much higher than $30,000 a year.

When our union formed in 2014, this salary security was something our members cared deeply about. We fought hard in our first round of contract negotiations to ensure that NTT’s would be guaranteed a minimum salary that showed the value of their work and allowed them a decent living. Our 2016 strike victory gave us our first contract, and this gave us legally binding guarantees that our members would be paid at least a certain amount per year, even if the university was in financial hardship. This is part of the reason that, in the above graph, average salaries increased so dramatically from 2016 to 2017–we as a union helped to make this happen! As long as we have our union, we will have the opportunity to renegotiate what this minimum value is from contract to contract, and who it effects.

We’ve been able to address a lot of the issues relating to wages that our members face in the past few years. This has been a part of the reason why our average salaries have gone up so much–together, we’ve made it happen! Salary minimums, raises, compression funds, and more. Stay tuned to our website for part two of our All About Wages series, in which we’ll explain our contract’s language about compression adjustments to salaries.