You are here: Home / Archives for Know-Your-Contract 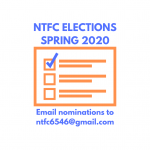 Just as it is important for us to #knowyourcontract, it is also important for us to know our constitution! And our constitution tells us that NTFC elections are just around the corner. In April, we will elect a new Executive Council and Stewards Council, the two bodies that govern our union. More details about each election are below. To run in either election, please email ntfc6546@gmail.com indicating which position you’d like to run for.

The members of the Executive Council are the officers of our union. They handle our day-to-day management, including working with our union affiliates like IFT or AAUP, managing our staff person, overseeing our finances, maintaining union records, communicating important information with our members, and more! We have a President, Vice President, Stewards Council Chair, Communications Chair, Bargaining Research Chair, Treasurer, Secretary, and Grievance Chair. The EC meets once per month, some regular duties outside of these meetings are required. If you’re interested in a particular position, feel free to contact our officers and ask about their experiences!

Our Stewards Council is the organizing body of our union. Meeting monthly like our Executive Council, they’re charged primarily with recruiting new members and assisting bargaining unit members in resolving their workplace issues. Each Steward has a turf, or a few departments on campus that they are the first point of contact for. Apart from organizing members, our Stewards also are the main legislative body of our union. They propose changes to the constitution, by-laws, and other policy changes at our general membership meetings. The Stewards Council is a great place to start for those who are interested in getting more involved with NTFC! Contact our Chief Steward, Heather McLeer, if you’d like more information about Stewardship. 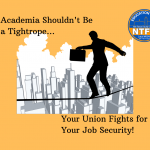 Before the 2016 strike won NTFC our first contract, most non-tenure track faculty (NTT’s) at the University of Illinois, Urbana-Champaign (UIUC) had little to no job security. While some individuals were appointed on contracts lasting several years, most of our members were appointed on one-year contracts.

Each spring, these NTT’s faced the stressful possibility of having to go back on the job market for the fall. Updating resumes, securing letters of recommendation, and searching national job listings were regular parts of our members’ jobs, parts that competed with their duties to their students, their departments, and their research. Uncertain of their future, many were hesitant to buy homes in Champaign-Urbana or invest in the community they might be forced to leave the following year. This was not only a problem for new hires. Even NTT’s that had been at the university for a long time, sometimes decades, had no assurance that they would have their job come fall.

In addition to this regular stress and uncertainty, there was no guarantee of when NTT’s would be notified of reappointment. Some NTT’s would receive notice as late as July or August–just weeks before the semester began–that they had not been reappointed for that academic year. For these NTT’s, it was often times far too close to the start of the fall semester at other colleges and universities to find comparable work. This meant that many would be jobless or be forced to do jobs outside their fields with fewer benefits, resulting in great hardships for them and their families.

This precarity had other consequences as well. Uncertain of their futures, NTT’s were hesitant to do anything that might challenge the practices of people in power. As a result, academic freedom suffered. This fear was reinforced in 2014 after Dr. Steven Salaita had his offer to join the faculty rescinded when the Chancellor’s office reviewed pro-Palestinian tweets on his personal Twitter account. If something like this could happen to a tenure-track faculty member, NTT’s felt their own abilities to voice dissent were nearly nonexistent.

Our Union Fights for Job Security

For the first contract, these issues of job security were a top priority. NTFC won guarantees that letters of non-reappointment concerning the following fall would be sent out by May of each year. And although efforts to provide multi-year appointments failed, we did win a stipulation for those who have been in the bargaining unit for six years, granting them one extra year of an equivalent appointment, should they be let go.

With our first and second contracts, we have come a long way from the precarity of one-year contracts and late appointment decision notices that used to be regular parts of NTT life at UIUC. We do, however, still have a long way to go. Some of us, especially newer hires, still face serious job security concerns in their first few years with the university.

We will continue to fight for your interests, but we need your ideas, your energy, and your expertise to make NTT job security at UIUC a reality.

Please reach out anytime. NTFC works best when we all work together! 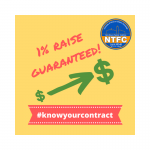 Apart from getting assured minimum salaries and compression wage raises for NTT’s, NTFC has fought to ensure that each NTT will get a raise from our contracts. Before we successfully negotiated our second contract this summer, there was no assurance that our members would be making more this year as an NTT than they did last year. With today’s rapidly increasing costs of living, especially in healthcare, many NTT’s found that they needed their salaries to increase every year to keep up. While the Chancellor and Provost did announce salary increase programs from time to time, these were entirely at their discretion. We as NTT’s had no say in when we might see our next raise.

In negotiations this past summer, we also knew that our members were expected to see a jump in healthcare costs outside of normal inflation. Because of this, we negotiated to include a one-time, $750 bonus for all faculty employed at the university as of August 15th, 2019 (just before the 2019 AY began on August 16th, 2019). So, if you thought your September paycheck seemed much larger than normal, this is likely the reason.

Your Union, Your Issues

We’ve been able to address a lot of the issues relating to wages that our members face in the past few years. We’ve added contract language to establish guaranteed salary minimums, salary compression adjustments, guaranteed yearly raises, and more! This has been a part of the reason why our average salaries have gone up so much–together, we’ve made it happen! While we have done great things, we still have a lot of work to do to build on what we’ve already achieved in our first two contracts. If you want to see your union fight for certain issues in the next round of contract negotiations, please let us know your thoughts! We also need to remain vigilant, making sure that the gains we have fought so hard for are being followed through with. That’s why it’s so important that you know your contract! 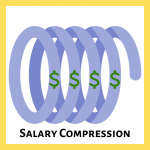 Some of our members have been teaching, researching, instructing, and working in other capacities as NTT’s for a very long time. Yet, they’re making only a little bit more now than when they first started in their positions, five, ten, or even twenty years ago. Inflation makes this problem more complicated. It means that, sometimes, new hires come in starting at pay grades that it took older hires years to achieve. This has the effect of compressing their pay relative to their experience, and it makes these faculty members feel less valued and respected by the administration even though they have given so much of their lives to this university.

We were excited to have the opportunity to negotiate over issues of salary compression in our second contract. In establishing minimum salaries in the first contract, we were conscious of the fact we’d need to build on it to ensure that it didn’t contribute to issues of salary compression. So, we negotiated language that provides for monetary recognition of long-term service to the university. Now, those who have been employed by the university since the beginning of the 2014 AY and make between $45,000 and $64,999 annually receive compression raises equivalent to $125 for each year they have been at the university in a position covered by our agreement. For example, someone who makes $48,000 a year and has been here for 7 years should have received a 7 x $125 salary raise this year ($875). So, if you’ve been here more than five years and make between the amounts above, you should check your paycheck this fall! Make sure that you’re getting the raises you deserve for your long-term service.

In part 3 of our series All About Wages, we’ll be looking more at the new, minimum salary increases that each NTT should receive yearly. Missed part 1? Read it here. 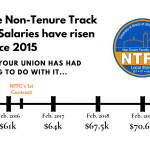 Since NTFC won our first contract in the spring of 2016, there has been a dramatic increase in the rate at which average salaries have risen, as shown in the timeline above.

While most of us are happy to see our paychecks increase no matter the reason, it’s also important to understand why and how these increases occur. In this first post of three, we take a look at Minimums in Article VIII of our contract–the part that’s all about wages.

Before NTFC won our first contract in 2016, there was no set minimum salary for full-time, non-tenure track faculty (NTT’s). Some non-tenure track faculty made as little as $30,000 a year, a salary on which it was nearly impossible to support a family, manage student debt, or take-on mortgages and car payments, much less support their professional development needs like traveling to conferences or buying new books for research. Furthermore, most NTT’s knew that at other universities nearby, like the University of Illinois at Chicago, unionized NTT’s were guaranteed minimum salaries that were already much higher than $30,000 a year.

When our union formed in 2014, this salary security was something our members cared deeply about. We fought hard in our first round of contract negotiations to ensure that NTT’s would be guaranteed a minimum salary that showed the value of their work and allowed them a decent living. Our 2016 strike victory gave us our first contract, and this gave us legally binding guarantees that our members would be paid at least a certain amount per year, even if the university was in financial hardship. This is part of the reason that, in the above graph, average salaries increased so dramatically from 2016 to 2017–we as a union helped to make this happen! As long as we have our union, we will have the opportunity to renegotiate what this minimum value is from contract to contract, and who it effects.

We’ve been able to address a lot of the issues relating to wages that our members face in the past few years. This has been a part of the reason why our average salaries have gone up so much–together, we’ve made it happen! Salary minimums, raises, compression funds, and more. Stay tuned to our website for part two of our All About Wages series, in which we’ll explain our contract’s language about compression adjustments to salaries.