You are here: Home / Archives for Archived

Here’s an overview of what this will look like:

As you can see, even at the highest end, the increase is small. But even with this small increase, it’s important all our members understand why this vote is happening. The two most pressing questions, I am sure, are these:

When NTFC was first formed and the dues percentages were determined, there was a law in place called “Fair Share.” Essentially, this meant that if you were represented by a public sector union like NTFC, you had to give them some money in order to offset the cost of representing you, regardless of whether you signed a membership card for them. In 2018, however, Bruce Rauner (you may remember him) funded a court case challenging this law. The case made it all the way to the US Supreme Court, which sided 5-4 with Rauner-backed Mark Janus.

This case, now often referred to as “Janus” among union folk, has completely altered the funding structure of public sector unions, including NTFC. So, when we calculated dues, everyone was paying their fair share. Now, we have people who benefit from the union, but pay nothing for these benefits.

In other words, the law changed, so now we have to change.

And now to the second question–why now?  I mean, if this happened in 2018, why are we asking to raise dues 4 years later?

As soon as the case was decided, NTFC leadership knew raising dues would be an eventuality, but we were also about to bargain a new contract. So when we went into bargaining in 2019, we worked hard to make certain we gained guaranteed yearly raises that would more than cover any dues increase to our members. And we won. Under the new Collective Bargaining Agreement, every member of our bargaining unit has received, and will continue to receive, a 1%-2% raise every year since 2019, even when the University doesn’t provide its own faculty merit raises.

So, with any increase in dues more than covered by salary raises, we were poised for this vote in Spring of 2020– but, well, I think we all know how the best laid plans went in Spring of 2020. And NTFC did not want to add to the uncertainty and stress by holding this vote.

Which brings us to now. Next semester we vote. And we need to vote yes. You can look to our upcoming Treasurer’s Report to understand the nitty gritty of what will happen if we don’t. But I want to leave you with this:

For a small monthly increase, you keep a union that has fought for you, and we get to keep fighting for even more.

Without this raise, we’ll all be on our own. And, as our guaranteed raises and so many other protections and provisions prove, we are stronger together.

Our President provides a brief update on the previous year’s bargaining sessions with the university related to the pandemic and on upcoming elections for Stewards and Executive Officers.

Our Secretary and Treasurer have also provided updates on the state of the union for our general membership.

Our semi-annual General Membership Meeting will be on October 18th at the University YMCA.  Come voice your concerns, prepare for bargaining, and get in the know.  If you have not yet signed a membership card but would like to attend, you can sign at the door. 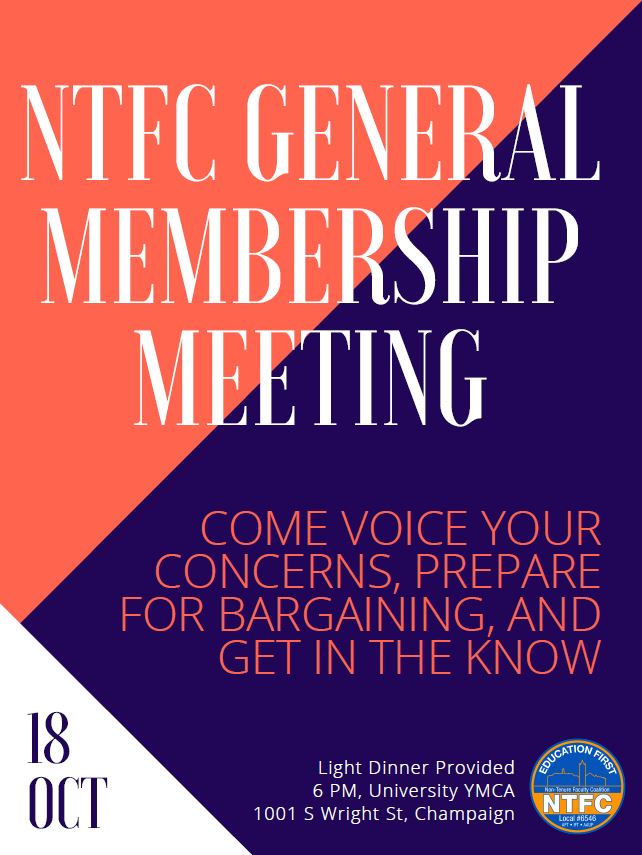 Join us for a happier hour celebrating the end of our organizing drive!  Bring your friends and family and get to know other NTTs.  Light dinner will be provided. 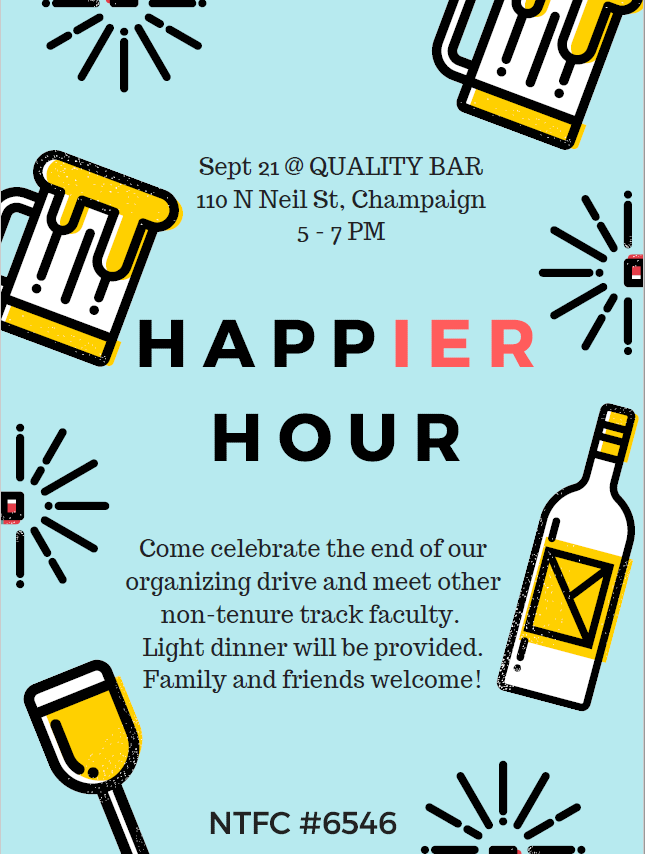