You are here: Home / Archives for Solidarity 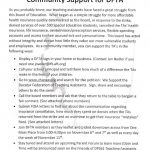 Since April of 2019, DFTA members have been negotiating with the School Board for a fair contract. Teaching assistants represented by DFTA face inadequate wages, rising healthcare costs, and obstacles to taking unpaid family leave. Faced with these and a host of other issues, the teaching assistants hoped to bargain in good faith with the Decatur School Board. Instead, their current contract expired, and DFTA was forced to call on a federal mediator to aid in negotiations. Now, after several sessions with the mediator, DFTA members are forced to withhold their labor in a strike.

We, the Non-Tenure Faculty Coalition #6546 AFT/IFT/AAUP, stand in solidarity with the 25,000 members of the Chicago Teachers Union (CTU) and the 7,000 members of Service Employees International Union Local 73, public-support staff, in their contract negotiations with the new Mayor Lori Lightfoot and the Chicago School Board. We stand in solidarity with their just demands for:

● Fully-staffed libraries in all schools

● Adequate compensation with no increase in benefit costs

In 2012, the Chicago Teachers Union (CTU) struck for seven days and won a victory against then-Mayor Rahm Emmanuel. Educators went out again for a one-day strike in 2016. These strikes were a precursor to the victorious wave of Red State educator strikes that swept through West Virginia, Oklahoma, and Arizona in 2018.

Since then, educator strikes of various lengths erupted in Los Angeles, Oakland, Denver, Washington State and even charter school educators, members of the CTU, in Chicago, UTLA in Los Angeles and OFT in Parma, Ohio. A victory in this current struggle for educators in Chicago could help build towards the next wave of educator and other strikes in the U.S. In fact, there’s little doubt the current strike by almost 50,000 at General Motors were inspired by all the educator strikes. We believe it’s in the interests of not just educators, but all workers around the U.S. to show solidarity with Chicago educators.

During her election campaign, Mayor Lightfoot agreed with many of the educators’ criticisms of what needed to be changed in the Chicago Public Schools. However, once elected, her promises to both the CTU and SEIU Local 73 have yet to result in any meaningful contract language. Mayor Lightfoot says she doesn’t respond to pressure, but the entire history of the labor movement up through the most recent Red State strikes have made similar claims from those in positions of power ring hollow time and time again.

The CTU and SEIU Local 73 are standing up for the children of Chicago, for all unions and working-class people, in this time of budget cutting, union busting and devastating assaults on our living standards. These unions are fighting for the kind of schools our students, parents, educators, and communities deserve. Therefore, we, the Non-Tenure Faculty Coalition #6546 AFT/IFT/AAUP, stand in solidarity with the Chicago Teachers Union and Service Employees International Union Local 73 in their fight to negotiate a contract that addresses all of their issues with Mayor Lightfoot and the Chicago Board of Education.

The members of the BRFT face high turnover rates for teachers in their community, are underpaid, and receive inadequate benefits for their labor. They have been collectively bargaining for several months with the school board to try to improve the conditions of their labor and the conditions of education for the students at Blue Ridge. Their last contract expired in June, meaning that BRFT represented employees have been working without a contract for over three and a half months. Recently, BRFT had to call for a federal mediator to assist in the negotiations. Now, with negotiations still stalling, BRFT members may be forced to strike at the end of October.

BRFT represents over 110 teachers, aides, secretaries, drivers, library clerks, cooks, nurses and custodians.  The work done by BRFT employees is invaluable to the mission of education at Blue Ridge. We call on the Blue Ridge School Board to bargain in good faith with BRFT.

We, the Non-Tenure Faculty Coalition Local #6546 AFT/IFT/AAUP, express our full support and solidarity with the building and food service workers of the Service Employees International Union (SEIU) Local #73 in their fight for a fair contract with the University of Illinois administration. SEIU #73 members recently authorized a strike by a massive majority. We demand that the university administration negotiates a fair contract now for SEIU workers.

The labor provided by SEIU workers is invaluable to our campus and community. Each day, they clean, maintain, and help keep dozens of campus buildings safe, while also feeding thousands of students, faculty, and staff at the university.

The university administration does not appear to respect this labor, however. Building service workers have long been understaffed and overworked, while dining workers struggle to maintain their hours during summer lay-offs. All are underpaid and overly policed by their supervisors. The administration has shown that it is more concerned with SEIU workers tucking in their shirts than it is with paying them a living wage and ensuring their safety in the workplace.

In bargaining, the administration is pleading that they do not have enough funding to properly pay SEIU workers. This is despite the fact that the university is in its strongest financial position in years and has a seemingly endless stream of money with which to make multi-million dollar renovations and additions to buildings and facilities on campus–buildings that SEIU workers will be cleaning and maintaining.

We call on the administration to prioritize paying all of its workers a livable, decent wage, and to provide safe working conditions through a fair contract. We, the NTFC, stand with the SEIU’s fight for a #SayinPay, and will support them however we can.